I’ve been hiking every day, trying to get myself in shape for hiking Mt. Whitney (14,494’). A lofty goal, but what’s the use of a small goal? I’m not close to attempting it yet though.

Yesterday I was busy listening to the blackbirds singing in the reeds by the pond as I was walking when a bright splash of color below a hawk landing in a nearby tree caught my eye. I wondered what in the world it was, it was red and too bright to be a red-tailed hawk and there are not a lot of them near here anyway. As I focused in more closely, I realized it was a red fish being held in the bird’s talons. The bird was kind enough to stay on the same branch for at least two hours eating the fish, allowing me time to get my better lens and get a little closer, then to get even closer in my car for the shot below. After checking my bird reference, I found that it was a migrant osprey. They don’t live here (too dry), but he was passing through on his way to Oregon no doubt for summer breeding. The last time I encountered ospreys up close was in Maryland one evening last summer while riding my bike near the Elk River. There was a nest on a utility pole, and the two adults didn’t like that I was near, as there were young birds in the nest. They were getting quite testy with me and as I didn’t want to be dive-bombed, I skedaddled out of there.

This little fellow was sunning himself as I walked through ‘Rattlesnake Flats’.

Today, I took the same route, hoping to see the osprey again, but maybe he was on his way to Oregon, or still full from yesterday. I did see these American Coots. What caught my eye though were the patterns on the water. Doesn’t it remind you of some of the patterns in women’s clothing just now?

Then, I rounded the corner into an olive grove. I hadn’t gone far when a running something caught my eye. It looked like a REALLY big cat chasing a ground squirrel. I was busy sneaking up on it because I had the wrong lens (AGAIN) when a front-end loader came down the lane behind me and scared it away. Look at how big he is. I’d say about the size of a pretty large German Shepherd. 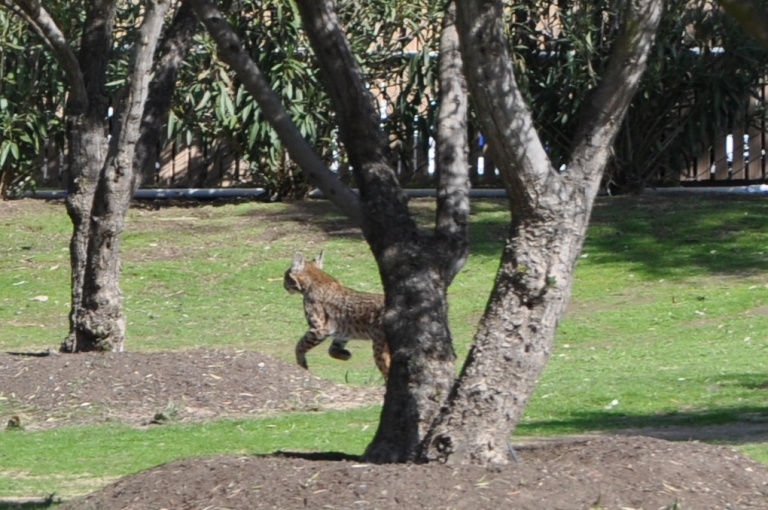 3 Replies to “Where the Wild Things Live!”