After leaving New Orleans, the rest of my trip has been driving, driving. I was going to stop and see Cousins Carol and John in Phoenix, but I realized I wouldn’t have time, I’ll catch up with them later. Texas is a BIG state, 880 miles across with the route I chose. I left central time behind and began mountain time in El Paso. I started the state with swamps and beware of snake signs, and started New Mexico with beware of snake signs. The speed limit rose to 70 mph in Louisiana, then 75 in Texas, quickly changing to 80 mph all through Texas, slowing to only 65 through the cities, beautiful roads though. I didn’t go much past 60 though. I passed huge wind turbines in an area known for ‘Strong Crosswinds’, overlooking oil pumpers and the smell of oil in the air just past Houston.

A lot of uphill driving after leaving San Antonio, Black Angus herds were all around the ‘Hill Country’. I stayed in rest stops or the Cracker Barrel in Kerrville TX. I had been so hot and sweaty the previous two nights, I just couldn’t face another sweaty night, so pulled into an RV camp in East El Paso. Blessed shower and AC! I had driven 480 miles that day and still wasn’t out of TX. During the night there, the winds were so high that the RV rocked! I was reminded of the fable of Pecos Bill, now I know why they made up that story. It also rained during the night. I went across the Rio Grande River, and for those of you who know where I live, the stream beside my house is bigger!

In New Mexico I drove past the Buena Vista Dairy, if you look this up on Google Earth, and know that each of those barns house at least 150 Holstein cows, there are probably a couple thousand head there. Thats a lot of cows and milking to be done! I’m still not finding ways to love WordPress and links have been a problem. Http://plus.google.com/111955142038550232998/about?galUS&hl=en-US&ved=0CAUQ2QY&sa=X&ei=3AVlUOLmOsiZiAKLv4GQBA

I stopped at a rest stop just east of Tucson. Rocked to sleep again with the diesels and awakened by them pulling out at 4 AM. I decided to just get on the road at 5AM. It was still dark and spitting rain (no wonder the deserts were so beautiful). I decided I don’t like driving in the dark. But I made it through Tucson, the I stopped and took an hours’ nap and kept going through Phoenix, Kingman, crossed the Hoover Dam and finally Las Vegas. Even though I hit Vegas on Friday at 5:00, the traffic wasn’t bad, so I kept going. I phoned Shelby to tell her where I was and to ask if there was anyplace to stop on this desolate stretch of highway. (Passed the Air Force base where they man the drones in Iraq). She suggested I keep going until Beatty, but having not seen any signs for Beatty, I decided to pull into the first rest stop I saw. Turns out, I was 30 miles below Beatty. What a peaceful night-no trucks. I had driven 630 miles that day.

Since I’ve been here, their Internet and phones have been sporadic, so I’m sitting beside Boonies in Dyer, where I have a good cell connection, but still won’t upload. Number Two try – at Starbucks in Bishop: 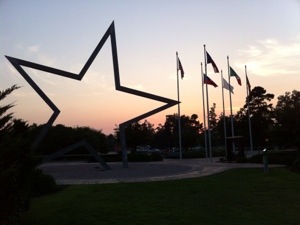 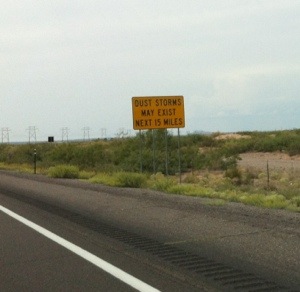 4 Replies to “Straight through driving”