Tuesday: After spending two of my first five days of travel in truck stops, I’m looking forward to two nights in this beautiful park. I’m parked beside a rushing mountain stream, although without my hearing aids, it’s a lot quieter, but I can still hear it 🙂 praise God! The moral of this story is – don’t wait until you’re too old before visiting beautiful places and wear ear protection around loud noises. BUT, I won’t hear any trucks tonight!

I never realized until this past summer how dependent I am on the Internet! It seems like everything I do on the phone or iPad requires an Internet connection, even looking for directions. Kyle, I’m beginning to wish I’d gone laptop instead of iMac because of the connection problems.

I’m going to the top of the mountain in the morning. There’s also a cemetery near enough to ride my bike to.

Wednesday: the top of the mountain was pretty much shrouded in cloud all day. I walked to the top of Clingman Dome, but the fog and mist kept me from seeing the 360 degree view. But I hiked a portion of the Appalachian Trail. It was beautiful and typically rocky (if you know the AT). Dont worry, it was a popular stop, so there were several hikers I encountered. With all the hemlocks and evergreens, it smelled like Christmas. Pictures will come soon. I then went to an abandoned village near where I’m camped, that at first I thought was homes of mountain people that had been displaced by the national park service. I was taking pictures when it dawned on me that these homes were huge (by poor people’s standards). While I was there, a bunch of people arrived and a nice gentlemen explained that these were the ‘cabins’ of millionaires from Knoxville! No wonder the rooms are so big. The Appalachian Club is in the process of refurbishing all those cabins, as they’re all in good shape considering they haven’t been occupied since the 30’s.

I’m finding that if I attach small pics that I’ve taken with my phone, they’ll upload ok. So, I’ll have to take more with my cell!

After I leave my spot on the mountain that has cell signal, I’ll be visiting the cemetery. Then I’ll hook up my car to Harvey in order to continue on to my cousin’s house tomorrow morning. 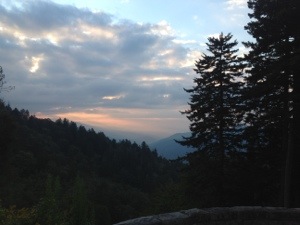